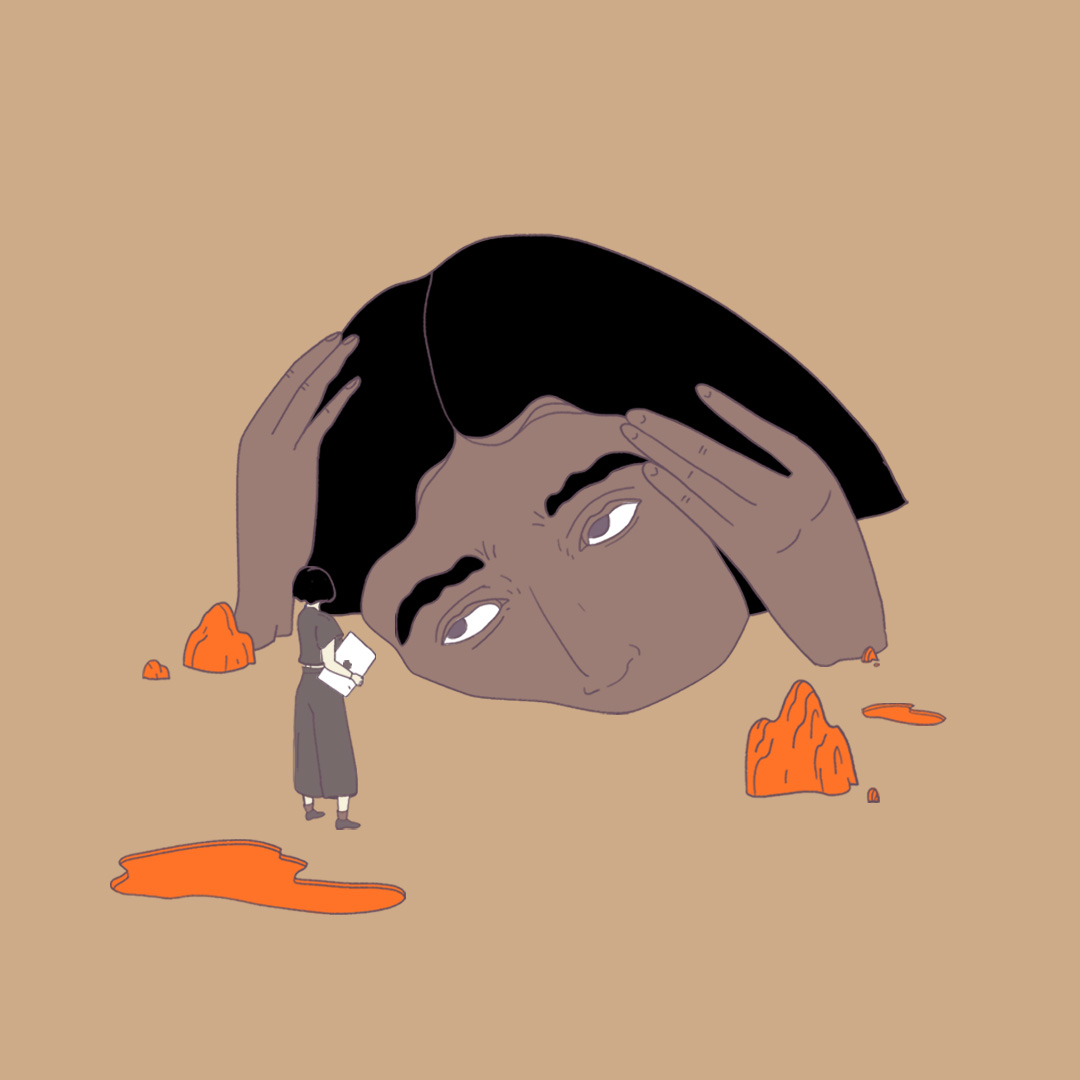 I didn’t know exactly what anxiety was and how it worked until I was 22. I was already neck deep in adulthood, but thankfully in an environment where I was surrounded by women who were educating me.

Watching the way they lived in the world, carried themselves, spoke and made decisions made me understand that subconsciously, I had become my own worst enemy, my worst critic, and a jumble of nightmares that I have intricately wrapped around the nuances of my own existence over the years.

Thomas Hobbes, a 17th century English philosopher said “We would not be anxious if we were not curious. If we wish to remain inquisitive, to take on the most enriching aspect of the human condition, we must be willing to live with the anxiety that goes with it.”

This is all fair and well. A healthy amount of anxiety keeps us fueled, but in the age of FOMO, we are an uncontrollable mass of bodies who want more, more and more.

So in that world, in a world you cannot change for your own wellbeing, where do you go when you cannot go home? When your body, your ultimate home, is an unwelcome space?

The COVID-19 pandemic stuck me firmly in my house, and as the days went on, I started to feel my body again. I began to slowly come back to the texture of my skin, the mess that I have made of my brain, and the sickness in my body that was yelling at me to just STOP.

I was devastated at what I saw: My body as a home was a mess and with that came shame.

Writing this was difficult and tearful. I was embarrassed to own my truth. I was embarrassed of the way I had let society dictate what fuels my anxiety, and how much of it replaced conscious and calm decision making, self-confidence and the basic philosophy of how I want to be in this world.

Peace, that’s the only ‘P’ I want. Instead, I have been defined as a proactive, punctual, persistent, passionate, people pleaser. I aligned with those words, but I also used those words to vilify my body and my spirit.

WE ALL GO THROUGH IT

Currently, high functioning anxiety is not a recognized diagnosis. “It’s evolved as a catch-all term that refers to people who live with anxiety but identify as functioning reasonably well in different aspects of their life,” according to an article by Arlin Cunic in Verywell Mind.

My whole life, despite having an autistic brother, my parents saw anxiety and depression as a figment of an overstimulated society. It’s a narrow thought, but we can’t deny that being digitally overstimulated is a factor, and we’re a generation that has become fixated on a pixelated version of ourselves.

My own identity has become a byproduct of anxiety, and others fuel it. People ask me, “Are you a Virgo? Are you a Type A personality?” Yeah. But I also have a heightened sense of worry, so stop trying to label me.

I have been made fun of for being persistent with my ideas and my way of doing things. What people don’t realize is that if things are not going the way that I have predicted them to, it results in obsessive thinking and dwelling on every word and every action – until I make myself sick.

I find it hard to take breaks. When my body eventually catches up to the layers of emotions and anxieties I put away, I spend hours in bed, paralyzed by my own tears.

This Type A personality that I have personified so well has everyone convinced I have my shit together, while I sit here with severe imposter syndrome in almost every aspect of my life.

I want to miss a deadline. I want to be late to places. But I have an infinite supply of anxiety that triumphs over coffee. The fear of failure and not being good enough propels me forward at a speed that almost dissociates me from my body.

I’m a mass within a skull sitting in front of a screen, with fingers that type. The rest of me? The lungs that breathe, the heart that beats, the muscles propping me up on a chair for hours on end? Those parts of me are neglected for days on end.

THE TABOO OF IT ALL

I’m a South Asian woman who was raised in the Gulf, so neither aspect of my upbringing supported mental health. In South Asian culture, mental health is dealt with by pretending it does not exist, and it was the same here in the Middle East when I was a teenager.

Growing up, we are gaslighted by loved ones who are supposed to be the most understanding individuals in our lives. Healthcare professionals and policymakers are also privy to this reality, which gravely affects healthcare systems and downplays people’s suffering.

Is shame really worth all this? I myself am not ashamed of the fact that I have anxiety, but I am ashamed that I have allowed myself to become a product of a society that hides from it.

So, within this society, what on earth is high-functioning anxiety?

Your anxiety has made you an overachiever? What could possibly be wrong with that?

What’s wrong with that is we are constantly being duped to forget who we are, what we are capable of doing, where we came from, and where we are headed. And you do it to yourself, because you do not know better, and no one is around to show you better.

Over the years, you accumulate discarded versions of yourself that you fling to the side in a rush to get to the other version, the better version, and in that we’ve set an impossible standard.

A survey into anxiety by the World Health Organization shows that anxiety is significantly higher in girls with a 33.6 percent margin over boys. Our Womena survey showed that 43 percent of women feel more anxious after the age of 18. 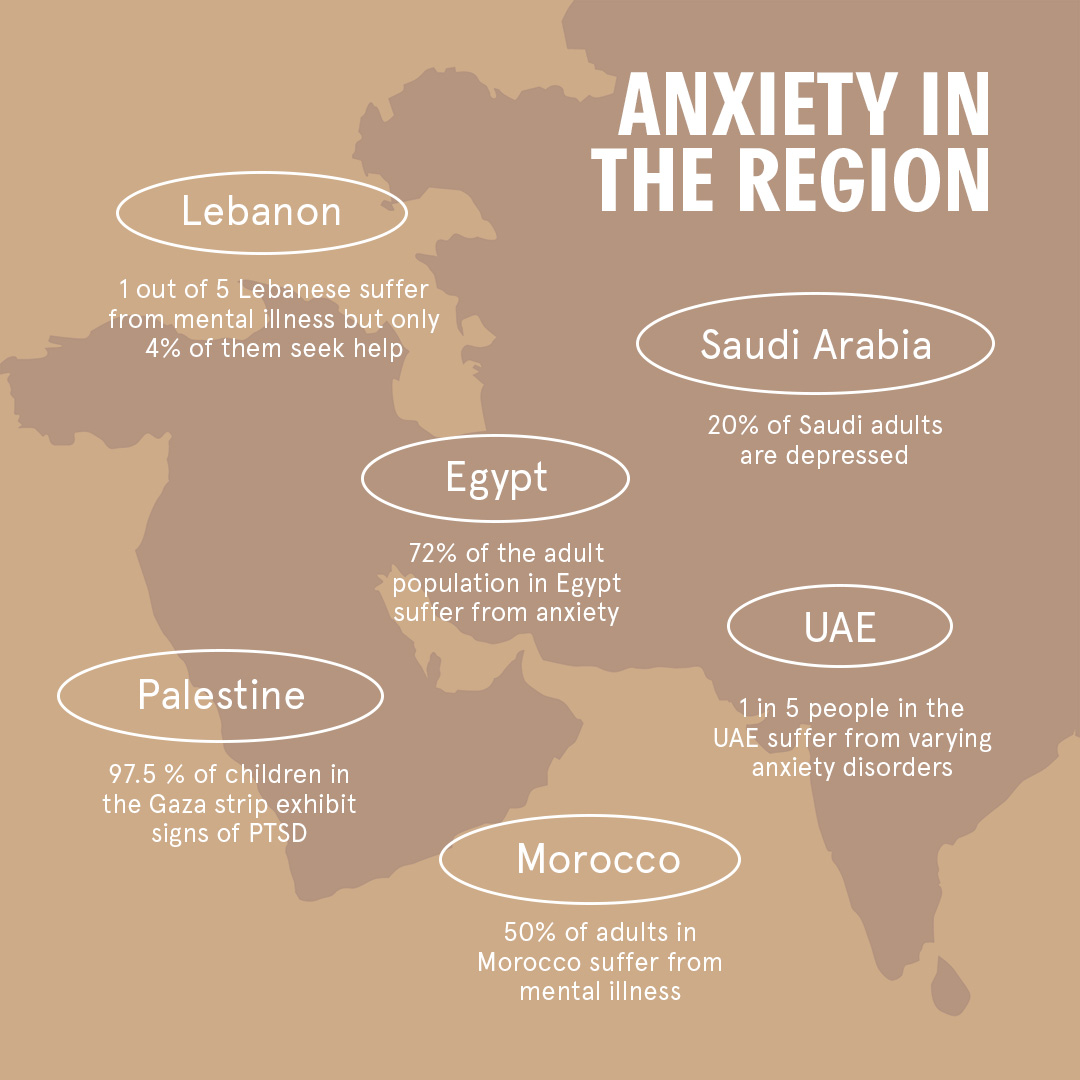 *These statistics are for the graphical purpose of showcasing that mental health is prevalent in the region, but by no means to compare anxieties, causes of mental health, or trauma.

I myself am not ashamed of the fact that I have anxiety, but I am ashamed that I have allowed myself to become a product of a society that hides from it.

Society, tradition and familial expectations are some of the most pressing and anxiety-inducing factors in this part of the world. Our families and extended aunties and uncles are waiting with their checklist of what makes you the perfect woman or man – and this is a list that is time sensitive, burning as you look your 30s in the face.

Anxiety has also affected and scarred my relationships. I judge other people on the same scale of harmful productivity as my own. I am often disappointed in them. Everyone is held to impossibly high regard, and those I love see me as overbearing, high maintenance, and rude.

Social circles ebb away, becoming almost nonexistent over time. But I remain the loyal friend, the ride or die because disappointing those I love is my worst nightmare. The pressure to be at my best constantly, when in reality no one is demanding that of me, is a heavy weight to carry.

Vacation days, sick days, menstrual days (thank you, Womena) pile up in my calendar, unused, rusting away until HR is slightly alarmed, threatening to freeze access to my accounts unless I take some days off (thanks again, Womena).

Despite all the hard work fuelled by my incessant anxiety, I cannot reap its rewards. I cannot stand compliments and appreciation makes my skin crawl.

Introspection is the new trend, but it’s a no brainer that this level of intimate critical thinking of the self is damaging beyond repair. There is often a paralyzing level of procrastination that I reach some days, and then crunch time where I find myself glued to my work for 18 hours straight, agonizing over details that on the surface look effortless.

Painfully intimidated by the future and unable to hold myself back from that mental and physical fatigue, there are long periods of time where I simply cannot relax, my body knotted in places a masseuse would cry about. My body as my home is a tangled mess.

So how does one fix it? What’s the cure for anxiety? I’ve tried meditating. My father has quoted the Buddha to me as a form of guilt-tripping me out of my mental space, saying that one is simply riddled with anxiety because they hold unwanted need, unnecessary greed and unequivocal stupidity.

To a certain extent though, there is truth in the constant dissatisfaction that we battle with as human beings. If you think about your pain, what is it rooted in? I believe it is rooted in desire, and it keeps us chained from our freedom to choose.

As an act of rebellion against my anxiety, I’ve begun to unflinchingly accept the world for what it is. To accept the way I am in the world, how I move, how I speak, how I do things, but it’s still not good enough.

This toxic consciousness of the present self comes from our comparison of the self that existed an hour ago, a day ago, a lifetime ago. We allow it to create our identity, we embrace and we hold onto it with a tight grip. “This is who I am. I am punctual!” Leaving no room for the person who for once, would like to wake up without a rush of blood to the head and enjoy their morning tea.

Through the internet, we have been taught to take on pains that are not necessary to us. I watched that Instagram model I love so much agonizing over the fact that she can’t get rid of her already nonexistent tummy pouch, flexing her abs in front of the mirror on Instagram stories to feel something.

So let me do the same, let me take on her pain, hold onto it, and adapt it into my own anxiety about my own body.

The artist I recently bought work from is on a drinking binge because she is feeling a creative block and writes about it at length in her captions. Let me justify my laziness by claiming her lack of inspiration as my own.

The digital age has given us postmodern angst and a suitcase full of anxieties that are not our own, that we protect like a mother her child, adapting it to our own identity. I’ve realized the safest way to test this theory is to step back from something that is causing me anxiety, and I quickly begin to realize that it doesn’t have as much of a hold on me as I thought it did.

Regardless of my anxiety that is yelling “Doom!” inside my head right this moment, I’m hopeful that we will stop being complacent simply because we are aware, and instead become a society that wakes up every day and chooses better for each other, for ourselves, for our minds, and our bodies – our home. 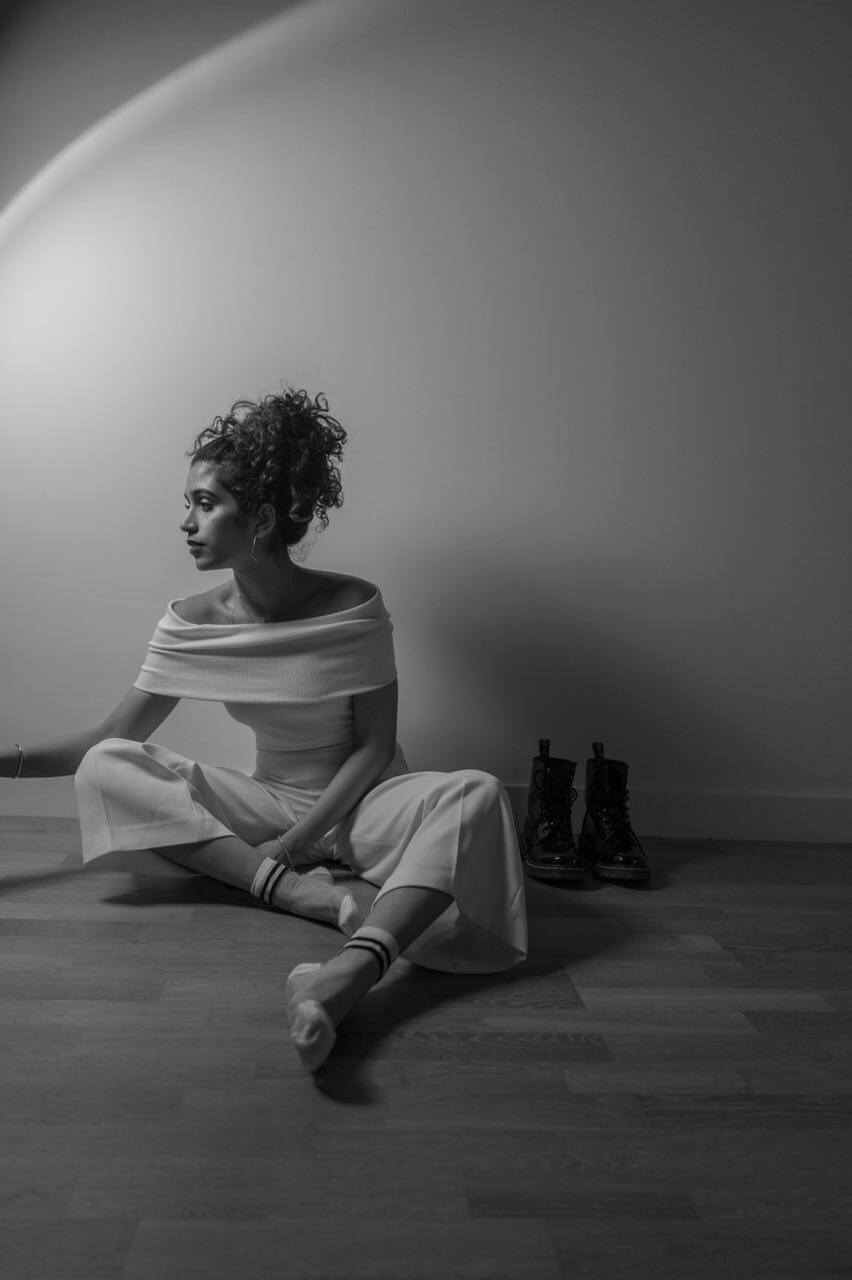 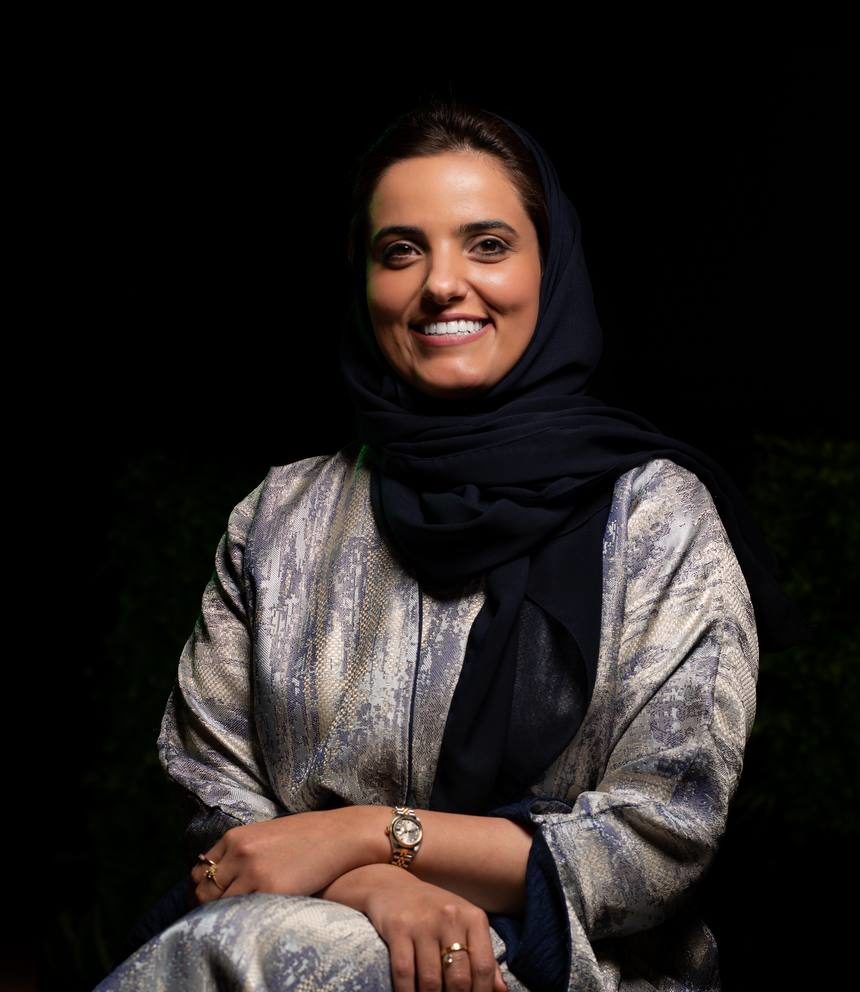 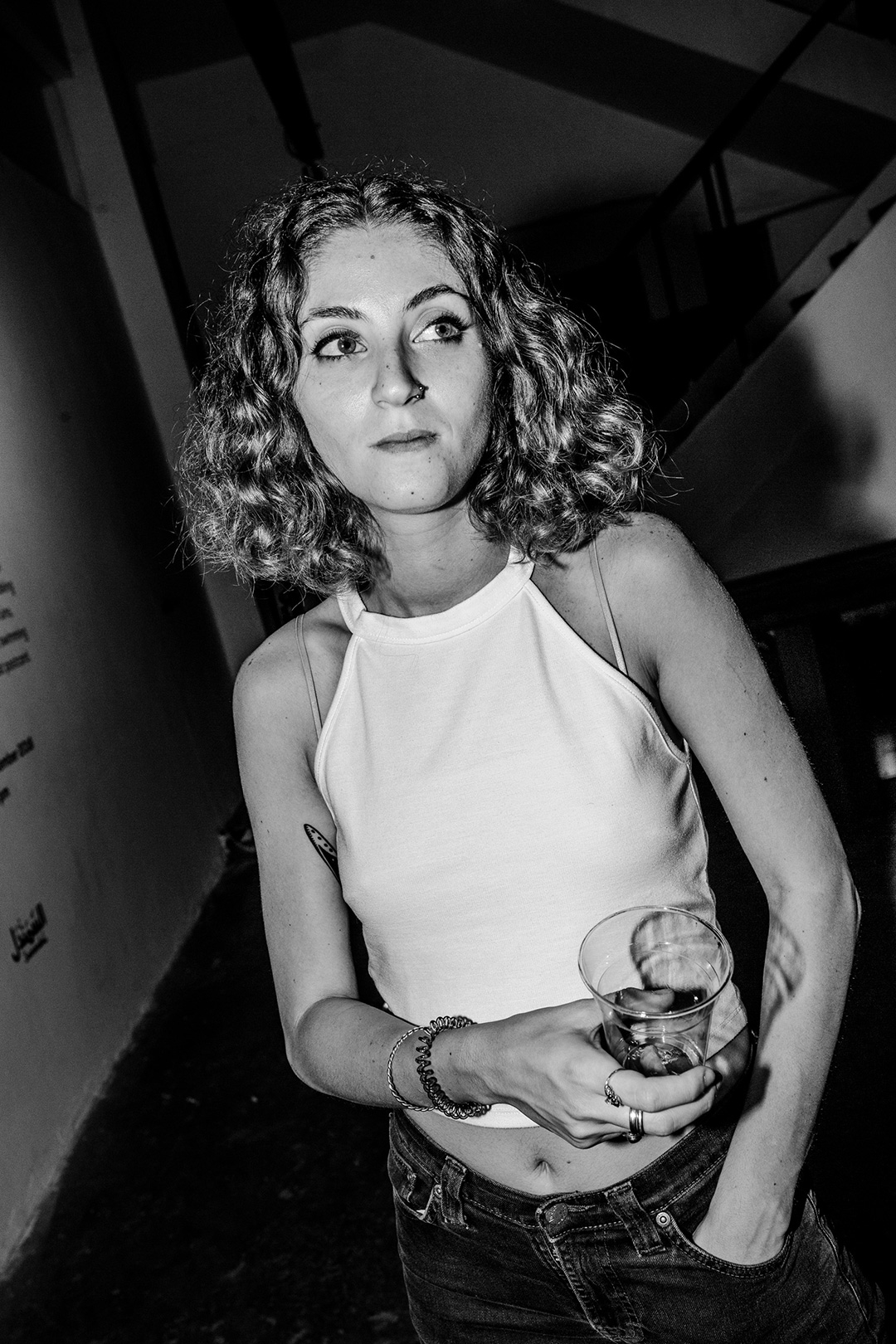